Businesses can now get top quality new offices in Eastbourne and elsewhere in East Sussex on ultra-flexible terms in a pioneering move to address the Brexit market. As part of its economic development programme for the area, Sea Change Sussex has introduced a three-month notice period in its leases which, innovatively, can be served by occupiers at any time. This is designed to provide an exceptional degree of flexibility for companies ... 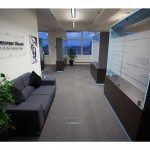 The first office within Pacific House has now been let - to transport engineering company Bourne Rail. Bourne Rail provides civil engineering services to the rail industry, handling projects such as installing and upgrading signalling systems and high voltage cables. The firm is just starting its third year of operation and has grown rapidly, expanding its workforce from 12 to 30 in the last year. It has taken an office on the ground ... 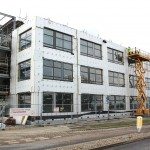 Construction work to create Pacific House – the first offices on Eastbourne’s new Sovereign Harbour Innovation Park – has achieved a vital step forward: the roof, floors, external insulation and windows have now been installed. Pacific House will be a contemporary, three-storey business centre (see artist’s impression below). It will be completed later this summer.

Construction of the Sovereign Harbour Innovation Park has started in Eastbourne with site clearance and piling works. The 5.5 acre business park is being created by economic development company Sea Change Sussex, with support from Eastbourne Borough Council and East Sussex County Council.

Receive our news by email